Series: What God has to say about EVIL

Warnings have been repeatedly conveyed to various Australian authorities since 2010 when they began oppressing people who are servants of the Lord God Almighty.

They are not coming against man, but against the Spirit of God.

This may seem a bold statement, but it’s no exaggeration!

Quoting from correspondence to an eminent Australia judge (who can get the message through to the recalcitrant [unwilling to obey] rulers who are obstinately defiant of God’s authority), the Lord has sent warning after warning to these so-called leaders, saying His laws will not fall to the ground just because people ignore his words of warning.

“…repeatedly made you aware of the terrible plagues and travails destined to come upon the country unless the government ceased the persecution of the House of God and His servants.

Now they’re coming to pass! Some curses are more evident than others – the enormous debt and other financial troubles afflicting Australia may not be as noticeable (yet), but the massive bushfires and droughts destroying the country’s farming and grazing resources are glaringly obvious to all.

Please be clear – Australia’s disasters are because the rulers have ignored all the warnings and horrendous consequences that are directly caused by their continued hounding of an innocent Man of God, and foolishly introducing laws legalising same sex marriage and abortion (NSW). None of which have a place in a Christian country and are an abomination in God’s eyes.”

God has clearly explained the consequences of broken laws which have caused legalities to come upon Australia, and the resultant calamities.

Ignoring these warnings has caused these horrendous costs to the people of Australia: 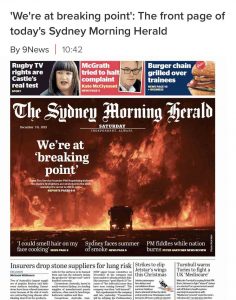 causing many Sydneysiders to choke, as black ash and charred gum leaves blown up to 100kms rain down upon them. The city is blanketed by such heavy smoke from the surrounding bushfires that, according to the Bureau of Meteorolgy it appears as rain on weather radar systems.

It’s time for ‘quiet Australians’ to relentlessly agitate with their local politicians and media until they demand that their leaders repair God’s broken laws so that the tragedies befalling this nation can be quickly reversed – for the Lord eagerly awaits the time that He can mercifully relent! 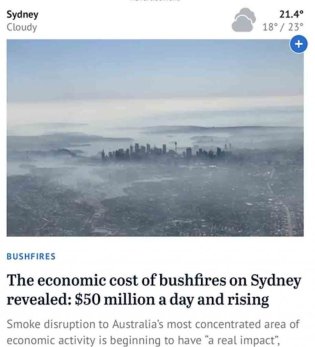 Be part of the solution.  Become one of the ‘quiet Christian Australians’ – repent, pray and worship God – and shake up the politicians and media (and anyone else you know who may be able to break through their intractable band of minders. Show them the key – it’s well documented ‘warnings’ here.

Nothing else will save Australia.

Act now! Before the people in this wonderful country suffer any further.